I spent last week in a basement in SoHo, looking at great length at naked people. I’ve spend the past two days looking as intently at the sea. I watch the waves and try to understand how to draw them, to turn their ceaseless roiling into lines on my page.
This close to shore, a wave’s life seems to last for five seconds, rarely more than ten. It emerges from the surface as a slowing building wall, some twenty yards wide. The pressure builds from both ends towards the middle and it becomes narrower and sharper at the peak. When I pull myself off my chaise and galumph into the sea to stand waist deep and cool off, from the side it is a narrowing triangle that reflects the sun as its angle grows more extreme. Its leading edges are dappled with bumps and ridges of energy that shimmer like the frosted glass on a public bathroom door, shadowy figures moving behind it, flashes of light bouncing of its front. The sun shines through its knife edge as it rolls forward, gleaming. Webs of foam are swept back from the ruins of previous waves and rise up to adorn its front wall, a white trellis quickly shredded in the wave’s rapacious path.

When the wall has grown as tall and thin as it can, it begins to collapse. A crest of foam appears along its battlements. The energy that was coordinated in the wave’s big charge now grows chaotic and splinters into fingers of white. The tongue of foam laps down the front of the wave and plunges into the surf, wrenching down its keystone and dragging it all down behind. Some of the froth ping-pongs on the surface, leaping to and fro, and then dives deep into the sand. The grandeur of the surge turns into a mad dash towards the shore, each water particle for himself

How the hell do I draw that?Leonardo tried. So did Hokusai.

So I watch a hundred waves wash in. Some are green, some blue, some auburn with kelp. My mind’s eye looks for a freeze frame, the single moment that explains the wave but is also of the wave. But though the waves arrives in a somewhat even rhythm, they are not purely cyclical. They follow similar patterns but each has a variation. Overeager waves shoulder past each other, jostling and disrupting the regular flow of energy, crashing the transition from hill to wall to blade to foam to shore.

So each drawing becomes an abstraction of waves in general. It’s impossible to track a single one perfectly. My pen’s not that fast. Nor’s my brain. I can record only the averages of my observations. 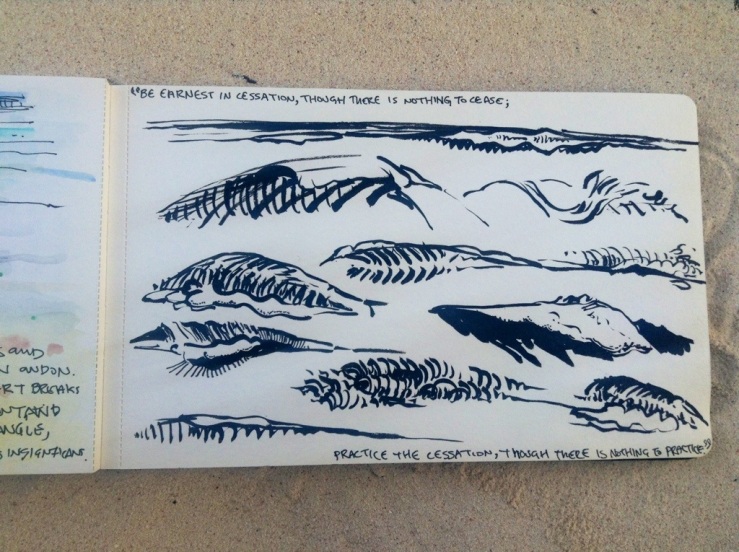 The best life-models aren’t the best looking or those with the best bodies. They’re the ones who can hold perfectly, unnaturally still and come back from their rest breaks and hit the exact same marks. They can look the same for three hours straight while I try to bolt down my powers of observation to notice the exact angles of their limbs, the creases in their hide.

Cezanne rarely painted cut flowers in a vase. He preferred pears and oranges that could sit in a still life for weeks without changing shape. His favorite subject was a mountain.

I am impatient, but training myself to be less so. To slow down and study, to be here and see what really is. Man, that’s hard. Especially when your subject jumps and changes its nature every millisecond. But the truth is, it’s not the sea I have to contend with. I am changing constantly. My eyes flit, my lungs expand, my heart pulses. I am all aquiver too, pulsing with nature’s rhythm.

Even if I drew Cezanne’s Mt. Ste. Victoire, or one of my beloved pieces of taxidermy, or a frozen photo of a great tsunami, I would be changing and moving. I change with every heartbeat. And even if I could control my breath and slow my eyes, the world would keep turning, the stars would keep dying, the universe would keep expanding, and life would move on. I learn with each line I make. I am different than when I began observing. The wave moves me too.

The Buddha told us long ago: Change is inevitable, suffering is optional. Roll with the flow.

Celebrating Bastille Day by drawing Louis XVI. Watch me do it on Draw with Me: https://youtube.com/watch?v=WsIJjPSQXx4
Happy Bastille Day! Join me tomorrow at 9 am PT on Draw with Me to celebrate and draw Louis XVI! https://youtu.be/WsIJjPSQXx4
Yesterday, I drew a tree.
Tomorrow is National Frog Jumping Day. So today I drew this guy. We’ll see if he jumps tomorrow.
Good dog.
This week I taught a class on Illustrated journal keeping and how to incorporate your photography and writing. Give it a try!