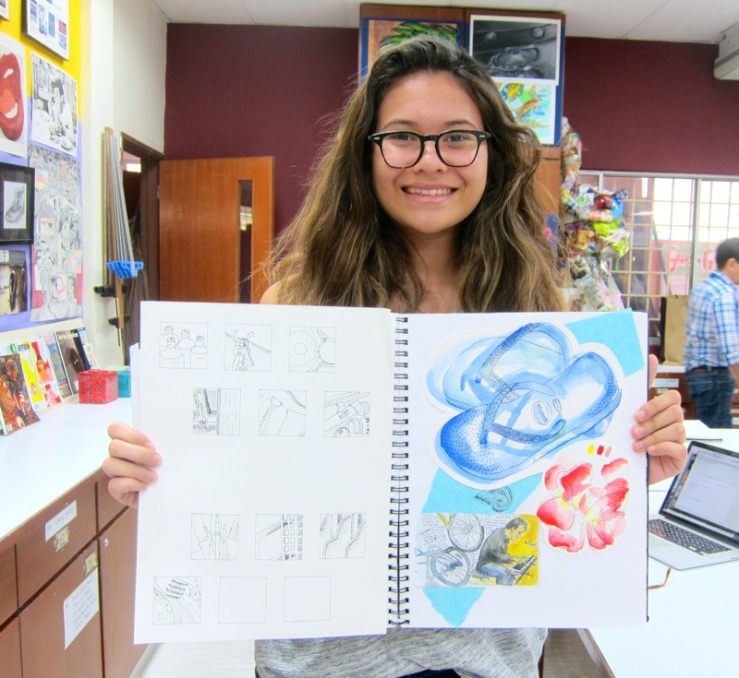 I don’t have loads of fond memories of teachers in high school. And most of the art teachers were especially forgettable. And as you know, the monkey voice in my head makes sure I still retain some ambivalence and self-doubt surrounding my own position as an artist and as a teacher. Nonetheless, I’ve agreed to spend a week with high school students at the International School of Kuala Lumpur and went with a few sketchy ideas and an open mind.

ISKL is a terrific school. It has students from fifty countries, all studying in English, and they go on to top universities in the US and Europe. Great art schools too, RISD, Cal Arts etc. They have lavish resources, a dark room, a theatre, art classes three times a week, a swimming pool, sports fields, a great library — so much more than Jack had in the NYC public schools system.

Whatever they do in life, the school is giving them a solid and broad base of culture. These are well-behaved kids, prepped for success, eyes drooping from after-school tutoring and late-night study sessions. Their parents are diplomats, engineers, top executives in global companies, or the cream of Malaysian society. Several have the talent and drive to get into a great art school, but their parents want them to study economics or law. Still, they are not hectored drones hell-bent on success. Just good kids who need to be goaded to take some risks.

Which was why I was there.

It took me a few false starts to figure out how to proceed. I began with a lecture with almost 100 slides, selling them reason after reason for how great illustrated journaling could be for their lives. I repeated this mistake in three different classes that day.

I went home the first night, still half dead from jet lag, dismayed by the realization that I’d become one of those droning teachers I hated in high school, telling kids what was good for them, urging them to follow my example, using incomprehensible, made up jargon, telling them what was wrong with thinking any way but my own. I’d behaved like I was doing a presentation back at my ad agency, selling my ideas hard, rather than being empathetic, rather than understanding where I was or what they needed. I’d talked so much that first day, we hadn’t even had time to do any drawing.

It’s one of the problems with being an ‘expert’, when you aren’t really sure what your expertise is or how it’s useful. It takes time to recut your experience to suit the current situation, to figure out how what you know night be of service, If you come in hellbent on asserting your expertise or tone-deaf and presenting your same old stump speech, you risk boring or alienating the people you wanted to help. You have to become expert in being an expert. In part, that means, knowing what you don’t know.

One idea I’d sold my host Ian on, was that we could get the kids to create a whole bunch of great sketchbook pages documenting the stories of the school. They could interview the staff in the kitchen, draw the equipment in the gym, sketch the poses people struck while studying in the library, and at the week’s end, we’d have a great collaborative project that he could curate somewhere. It wasn’t a bad idea but it didn’t set the kids on fire. I was excited to poke into all corners of the school, but these kids spend all day all year there and there were few revelations left, despite my exhortations to discover a new way of seeing. We did spend a couple of days drawing the turtles in the pond, the band rehearsing, the lost and found. But I realized that this very loose assignment was too ambitious and not sufficiently attuned to the way the kids think.

This was not like teaching adults. It’s not the self-motivated atmosphere of Sketchbook Skool. Kids aren’t in high school because they want to be, they’re not looking for ways to realize their potential. They’d much rather hang out with their friends or play video games. So they need you to focus them, tell them what you expect them to do, and make it finite. The older kids are working towards their International Baccalaureate, sort of like AP classes in the US, so they need final projects for their portfolios, not meandering explorations of the recycling cans or the locker rooms. My first days of loose experimentation in creative freedom left them lost, afraid of doing wrong and wasting precious time. 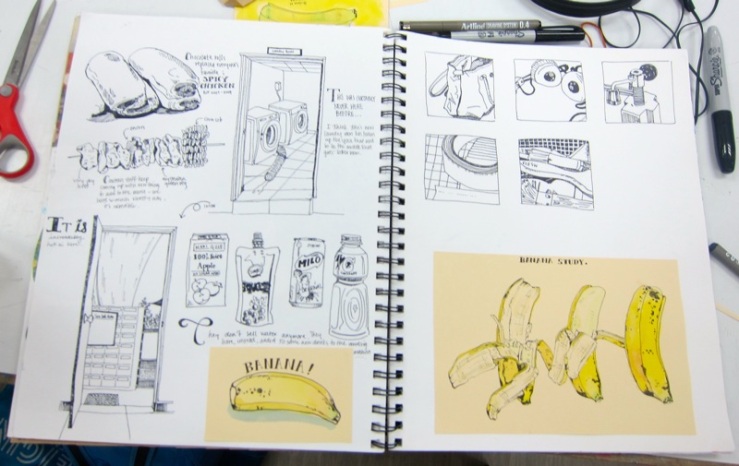 Next we gave them more specific assignments. Draw six things that are round but very different sizes, draw them the same size and arrange them evenly across the page. Draw a stack of books you’ve read in the library, giving them dimension, paying attention to the letterforms. Interview and draw one worker in the kitchen. Draw the place you’ll miss the most after you graduate. This was better, and they certainly did the assignments uncomplainingly, but much of the work was still sketchy and lacked passion.

Next step was to tone down all the demands of illustrated journaling, rather than insisting on 1. interesting drawings, 2. confident line work, 3. insightful, witty stories in 4. nice calligraphy, with 5. good composition and 6. a well laid-out page — let’s just get excited about drawing.

Things took off when I demonstrated how to do a technique I showed in Sketchbook Skool, I call “slow/fast”. First we drew a one-minute gesture drawing with a fat brush dipped in watercolor, followed by a carefully observed, detailed pen drawing right on top of the initial study.

We wheeled a motor scooter into the middle of class and sat around it drawing. The kids were silent, lost in drawing, and the results were awesome. The teacher told me, “This is usually my most unruly and disruptive class and I have never seen them so engaged. And I love the drawings they did. Many asked if they could keep working on them in their free time.” 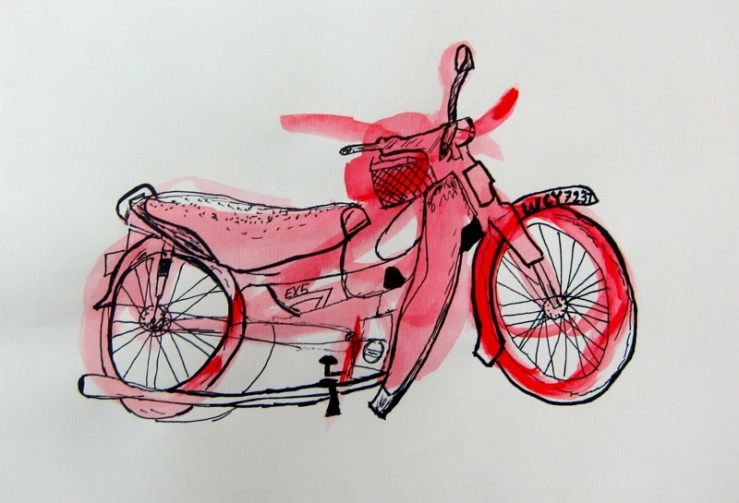 I tried the same Slow/Fast technique with another group, dividing them into pairs and having them pose for each other. The portraits were a huge leap from the work they’d done early in the week, individual, well-observed and alive.

Next we made a dozen or more squares on the page, then drew little snapshots of random scenes through a viewfinder, like a contact sheet or scenes from a movie. Again, the drawings were carefully observed and lively, the compositions were interesting and fresh. Initially we knocked out each little drawing in a minute or two, but then many of the kids went back and added more detail and color.

I also taught through example. I shared the pages I had made outside of class drawing around Kuala Lumpur, I passed around old sketchbooks, showed images I had made over the years. I did a lot of drawing, participated in the exercises, then walked around pointing things out here and there, try this, consider that.

On the last day, I hauled out my slides and books again, and this time the response was different. Now they loved drawing and it made sense so we could delve deeper into conversations about layout, expression, inspiration, technique, possibilities.

My biggest lesson was that you first need to show students how it feels to love making art. You need to have that momentary flash when you see why it’s so great. It could be the deep meditative experience that comes from really concentrating and going deep. It could be that moment when you pull out of that daze and look at what you have made and are blown away. Just doing one great drawing give hope. Even if the next one sucks, you know you can do it because you did it once. And when you have that knowledge, you have secure ground to build on.

Early in the week, one girl made several really great pages but I would hear her muttering to herself or her neighbor how much she sucked at drawing. Then I saw that she had written, in graceful swirling letters, right on her page, that she thought this drawing was awful and that she was no good. I explained how untrue I thought this was but also how, by asserting it over and over, she was creating a self-fulfilling process. We kept pushing ahead with more experiments that would distract her monkey mind and by the week’s end, she showed me drawing after drawing with pride.

I felt good but I wasn’t really sure if I’d really made an impression on the classes. So many of these kids are reserved and polite and not effusive and the monkey was still wondering if all this time and travel and work had been worthwhile, for them or for me. On Saturday afternoon, I went back to my desk to pack up my stuff and there on my laptop was a card. On the cover was a lovely watercolor portrait of me and inside the students had written (neatly lettered and beautifully composed) how much my time had meant to them, how much they had learned, how they now embraced risk and mistakes and how grateful they were I had come to their school. 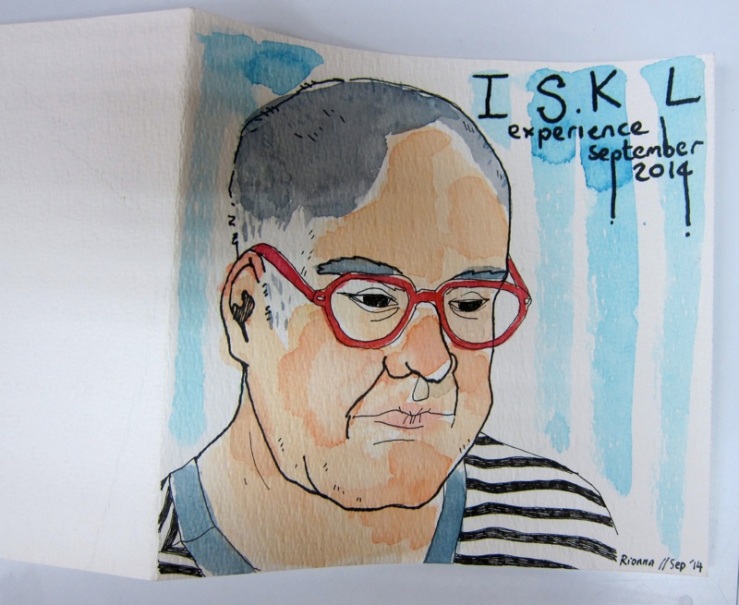 It felt like every corny movie about teaching I’ve ever seen, Mr. Chips, Mr. Holland, Mr. Kotter, but I was really touched. It’s a cliché, I know, but those kids taught me more than I taught them.
Now on to Beijing, to learn some more.

I like having my own room to play in.
If my workshop doesn't seem your cup of tea, let me know why. I still have time to change it! If it does, learn more about it at https://bit.ly/dannydip
My prodigal podcast, art for all, has returned, with a sheepish grin and a suitcase full of new episodes to be served up every Monday. Have you subscribed yet?
I wasn’t sure if these chalk markers were my cuppa tea. But they are kinda tasty.
A squid drawn in ink. Get it?
My peeps.