In the corner of my mum’s property, hidden behind the bracken, there’s a tiny pet cemetery from the 1930s. It only has two headstones, commemorating some dogs whose owners are by now in the ground as well. Patti and I discovered it soon after Mum moved into her house in the forest that surrounds it. We though it was the coolest thing ever.

We always romanticized death and its trappings; our morbid fascinations drew us together from the day we met. We delighted in the fact that Patti’s dad had driven a hearse and regularly played cards with morticians. We had Day of the Dead parties with a coffin full of corn chips  our house decorated with Mexican papier mache skeletons. 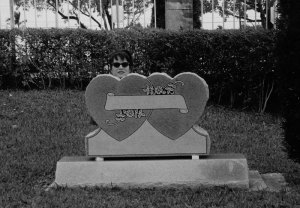 We would pull the car over at any graveyard we passed, then study the graves for funny names or tombstones carved with portraits of the deceased or symbols of their hobbies — guitars or classic cars. We loved Philadelphia’s Mutter Museum for its ghoulish exhibits and Pere LaChaise cemetery in Paris  where we paid our lack of respect to Oscar Wilde and Edith Piaf.

Patti gave me a lovely watercolor of a cemetery to hang in my office. We collected books of death photos, horrendous images of bloated corpses in kitchen chairs and skeletal remains in the bathtub.

When Patti was a few months pregnant, we stumbled on a section of a graveyard in upstate New York fdedicated to still borns and infant deaths. She insisted on having her picture taken with wee Jack yet in utyero,

Disturbing, right? It all seems like foreshadowing, which of course it was. We always knew we’d die, but somehow micking and delighting in death seemd like a harmless prank. The closer one gets to death and contemplates one’s mortality, the Buddhists say, the less one will fear it.

It didn’t really work, at least not for me. I was always fairly anxious about my own death, even more so about Patti’s. When we had to put our dog Frank to sleep, we were both hit hard; we couldn’t even bring ourselves to claim his body, despite years of joking that when he’d die, we’d add him to our taxidermy collection.

When Ninny, my mother’s mother died, I took it okay initially; she’d left us long before in haze of Alzheimer’s. But I was one of her pall bearers, carrying her shrouded body on a stretcher to a hole in Jerusalem’s Mount of Olives, her bony foot thumping against my hand with each step. We slid her into the hole, in what I thought would be a gesture akin to planting one of her beloved rose bushes, but it was hollow and scary and reeked of eternal void.

When my sister lost her husband, after just a year of marriage, I tried to be the strong one. We sat with Brian’s body face down on the couch for much of the day, then through yet another Irish wake, then an unrecognizable funeral. It was unimaginable that he was gone, but my sister somehow persevered, and even blossomed in the years that followed.

When my beloved mother-in-law, Phyllis, died in her living room after an endless death match with lung cancer, Patti was in attendance, holding her hand through the last agonizing days. That memory scarred her, Death shoving its loathsome face in hers, and steeling her somehow for the inevitable. Patti knew she would die one day and never wanted to go through such hell, she told me, but now she wasn’t scared of anything. Anything.

We stopped mocking Death as we grew older. It was no longer a country on the other side of the world but slowly crept over the horizon. We could see it now, the new home of twenty or more of the people who’d attended our wedding, some old, some gay, some just unlucky. It was getting familiar, inevitable, and much less of a joke.

Today, at least, I don’t fear it, not nearly as I did just a season ago. I have less to lose here in the land of the living. I still love life, don’t get me wrong, but for today, it has less to offer.

Tomorrow is National Frog Jumping Day. So today I drew this guy. We’ll see if he jumps tomorrow.
Good dog.
This week I taught a class on Illustrated journal keeping and how to incorporate your photography and writing. Give it a try!
Three years ago, I decided to try drinking a cup of tea and drawing live on YouTube. I've done it about 200 times since. Today on Draw With Me, we rewatched the first video and I drew myself drawing myself then. It was all very meta. You can see it here: https://tinyurl.com/metadanny
Beauty.
The pandemic and the internet have done something not good to my imagination. It’s time for a healthy dose of analog. Here’s my list of resources to get my brain back to reality: https://bit.ly/RewildMe