I guess it began when our TV blew up — after a dozen years of faithful service. I suddenly had to reconsider how our living room would look, find a new TV  and a piece of furniture for it to sit on, making changes to our apartment that we haven’t had to think about in years. And I’d have to do it on my own.

At first, the prospect filled me with dread and a big sense of obligation — one more hassle to deal with.

Then a pipe broke in our neighbor’s radiator and ruined the ceiling of Jack’s bedroom. It’s all been patched up but because we don’t know how to exactly match the color, I realized we’d have to paint the whole thing. All of which made me look at the disaster area that is Jack’s bedroom — a dense archaeological  collage of all of the stages of his childhood carelessly layered on top of each other, a room he really only uses now to sleep in — and thought it would be a great thing to rethink, and a creative project we could both get excited about.

So Phase One was to research HDTVs and cabinets (that took the better part of a month) and then pry open the wallet and get all the elements into our house. I worked stealthily alone so it could be a surprise for Jack (who had come to accept that we would probably never have a TV again) and  last night we flipped the switch and basked in High Definition mindlessness. 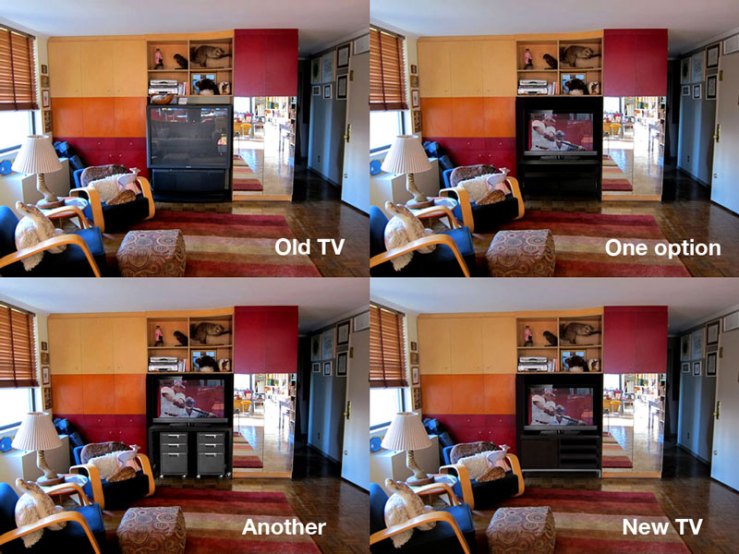 Next up is to make a plan for Jack’s room. He doesn’t seem to have much of an opinion about it yet, but I imagine a cool book-lined studio perfect for knocking out masterpieces and impressing girls.

Redecorating is like solving a Rubik’s cube and as soon as I consider Jack’s room, I start to think about turning my office into a proper studio too ( Patti and I had often discussed fantasy plans to put in counters and flat files and stuff but never did). And maybe redoing the living room. And rethinking the kitchen while we’re at it …

I spoke to a man who lost his wife around the time Patti died and he told me he developed  a strong impulse to redo his home too. He started rearranging furniture, painting walls and making his nest his own. I don’t think that’s what I’m doing. Instead, I am inspired by Patti’s example and aesthetic and am thinking of the  sort of place she would have loved. Patti had big dreams for our home but the limitations imposed by her wheelchair and disability frustrated a lot of those plans. Accessibility was always a huge factor in what we could do and even though she made our home a lovely place, a lot of the decisions that went into were limited by whether a wheelchair could get around it easily and whether everything was reachable from a seating position. Now I have carte blanche and a lot more freedom to create the home we both wanted.

We collected  a lot of tear sheets and catalogs over the years to inspire us but I decided to start from scratch and just pull images that felt like home to me. When I look at this collection (and you can see some of them below) I learned quite a lot about where my head is at these days.

The fact is, when I lie in bed at night and think about what I should do in our home, it’s mainly about pruning, chucking out a lot of dusty-gathering tchotchkes and stuff that fills the closets that I’ll never use again. Honestly,  I won’t be putting up decorations this Halloween (though we have two boxes full of strings of jack o’lantern lights and felt ghosts and stuff) and I won’t be hosting big dinner parties and using the dozens of tablecloths and doilies and aprons we have jamming our drawers. When you live in a place for a long time you just accumulate crap that has outlived its usefulness and I feel an urge to shed that skin.

What would I end up with if I did all that? A blank, minimalist place with empty closets and big, bare surfaces punctuated by the occasional Eames chair? Is that what I want?

I think I thought so, but when I look at all the pictures I chose to represent my definition of home they all have the same themes: lots of objects, lots of color. They are busy, energetic places. Granted they look a bit more organized and freshened up than our place, but they’re also not that different from where I live, and, frankly, from the art I make too.

It is interesting to do this sort of exploration, to challenge my assumptions, purge the cobwebs even if it seems daunting, and see where I am and where I should go.

Sometimes, like Frodo, I yearn to leave home and seek adventures; usually, like Bilbo, I think they are nasty disturbing uncomfortable things that make you late for dinner. But when change is thrust upon me and the world becomes vast, it is comforting to come home, to tuck in one’s tail and curl up under fresh, fluffy new blankets.

The weary Mole also was glad to turn in without delay, and soon had his head on his pillow, in great joy and contentment. But ere he closed his eyes he let them wander round his old room, mellow in the glow of the firelight that played or rested on familiar and friendly things which had long been unconsciously a part of him, and now smilingly received him back, without rancour. He was now in just the frame of mind that the tactful Rat had quietly worked to bring about in him. He saw clearly how plain and simple—how narrow, even—it all was; but clearly, too, how much it all meant to him, and the special value of some such anchorage in one’s existence. He did not at all want to abandon the new life and its splendid spaces, to turn his back on sun and air and all they offered him and creep home and stay there; the upper world was all too strong, it called to him still, even down there, and he knew he must return to the larger stage. But it was good to think he had this to come back to; this place which was all his own, these things which were so glad to see him again and could always be counted upon for the same simple welcome.

— The Wind in the Willows