Ten years ago, I illustrated a book called A Writer’s Paris by Eric Maisel. It’s about why/how you could/should move to Paris, at least  temporarily, to fuel your artistic impulses. It worked on mine — Eric’s publisher paid for Patti and me to spend a long weekend wandering around Paris and making many of the drawings that would fill the book. What a time!

I’ll be honest, I don’t remember the book’s argument in detail. I was irritated that the publisher thought to combine my drawings with some collage artist’s work and so I couldn’t read the final version of the book with an open mind. That peevishness notwithstanding, the basic premise of Eric’s book came back to me as I sat here in the Piazza Benedetto Cairoli with my Macbook on my lap. I’ve been in Rome for less than forty eight hours, but the magic of a different continent, city, culture, place and pace is already working on me. 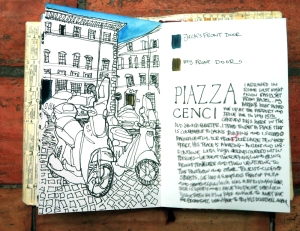 At Jack’s suggestion, I didn’t book a hotel room but found an AirBnB just a few meters from the door of his school. It’s a fourth floor walkup in a 15th century building with a giant front door key and iron shutters I swing open each morning to flood my room with sunshine. As I sit here in the Piazza across the road, I hear the tram rattle by, the chuckle of an accelerating Vespa, the doo-da, doo-da of the carabinieri, and snatches of Italian wafting over from the men on the next bench, smoking and joking. I’m not in Kansas anymore.

Being in a new place always open my eyes and ears. Everything is unfamiliar to some degree, a degree that inspires my record in ink to be deeper and fresher. My travel journals contain the richest pages on my shelves, the most experimental, the most free. Each day in a new city is both energizing and depleting. I strain every hole in my skull to suck in more and more information and end the day wrung out and deep in sleep.

Hanging out with my boy in his new city makes my imagination run wild. He lives and works in a gorgeous old building, a 15th century villa with frescos on the 16 foot ceilings and huge windows flung open upon mouldering terra cotta walls and stone alleyways strung with phone wires. His bed is narrow and hard but he has his own studio, bigger than our living room, with a checkerboard marble floor and walls filled with sketches and pages pulled from the old Italian magazines he buys at the flea market. A few blocks away is a park full of Roman ruins, fenced and gated to protect the hundreds of ferrel cats who’ve made it home. The Jewish Quarter is full of street markets selling big blocks of mozzarella and cadres of prosciuttos in chrome slings waiting to be shaven. Jack has learned to make pasta from scratch and to order a cornetto and a cappuccino with confidence.

He has less than a year till he graduates. But something in me tells him not to worry, to take it slow, to revel in this season in Italy, that it will be something he never forgets. Last week, he and his classmates traveled to Abruzzo and put on a performance in the earthquake ruins of a tiny village. Next week, he heads to Venice to sleep on a boat. I tell him that for the first year or two, he can keep his needs modest, can earn money here and there, can work on being a man of the world rather than a slave of the wage.

I spent a year in a garage in LA. And then I came back to the Manhattan haunts I had commuted through for decades, a new perspective on the same streets. It would be nice to have a garret here in Rome. Or to couch surf across India like Prashant. Or to get a cabin in the woods or a minihouse I could pull behind my car. It’s hard to eat leftovers  with  the same relish, but certainly New York is the kind of place I can have creative reawakenings, just like Eric’s Paris or Jack’s Rome.

Going somewhere fresh and rich and living just for one’s art for a period, that’s something every creative person should try, methinks. Forget the pressures of income of language and culture and history, just for a month or two, long enough to rearrange the pieces and shake the monkey back into his hole.

I don’t know that I need an adventure so complete, to completely pull up roots and repot on foreign soil. More likely, the many trips I have planned over the next few months will suffice. Next weekend, I’ll be in Austin. Then to Prague, Doha, Reykjavik, maybe Hanoi too. Shifting perspectives, fresh pages in my travel journal, the search for adventure, new faces, new menus, new conversations, all adding up to a big thick deck to shuffle and deal myself out another winning hand.

If my workshop doesn't seem your cup of tea, let me know why. I still have time to change it! If it does, learn more about it at https://bit.ly/dannydip
My prodigal podcast, art for all, has returned, with a sheepish grin and a suitcase full of new episodes to be served up every Monday. Have you subscribed yet?
I wasn’t sure if these chalk markers were my cuppa tea. But they are kinda tasty.
A squid drawn in ink. Get it?
My peeps.
Sketchbooking down Memory Lane. #sbsdrawwithme