My grandmother won prizes for her gorgeous chrysanthemums. She had a huge rose garden that was designed like a Persian Carpet. She had two full time gardeners who kept her topiaries trimmed and her lawns like billiard tables. She taught me to love making things grow and to respect the endless powers of Nature.

One of her pet peeves: “Why must Americans call it ‘dirt’? It’s soil. It’s earth. It’s not dirty. It’s wonderful.”

Last week, I thought about her often as we watched a wonderful film about turning dirt into magic. The Biggest Little Farm is a documentary about the Chesters, a cooking blogger and a filmmaker, who worked for eight years to transform a mistreated farm into a Garden of Eden.

END_OF_DOCUMENT_TOKEN_TO_BE_REPLACED

Last week, I spent a lot of time watching Floridians. There were a fair number of geezers in golfing shirts and slow-moving Cadillacs, but the most interesting creatures by far were the birds. Limpkins, buntings, grackles, curlews, grebes, plovers, loons and whipoorwills.

I love watching birds, even in New York where you mainly run across grayer species likes sparrows and pigeons. The park across the street is home to doves, starlings and the occasional woodpecker but the most exciting are the red-tailed hawks who nest on the top floor of the NYU library. They hunt in the morning and at dusk, usually pigeons, squirrels and rats, but rumor has it they show up with the occasional tabby. I always used to worry they’d snatch our miniature dachshunds and try to fly off with them while I gripped the leash like a kite string.

END_OF_DOCUMENT_TOKEN_TO_BE_REPLACED 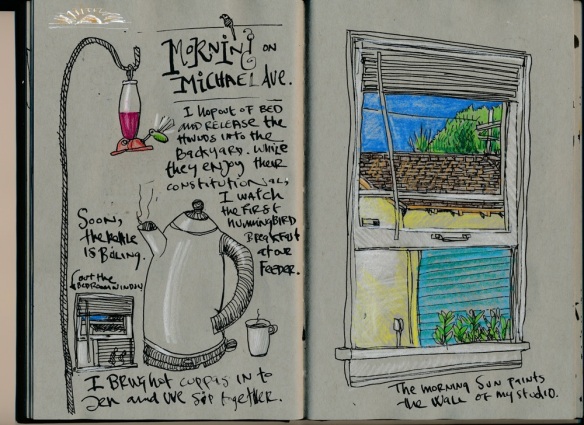 I learned to watch birds on New Year’s Day, 2012. Jenny and I went to the annual Bird Count in Central Park, a frigid but sunny morning outing, on which we counted a goodly number of feathered friends, including two different types of woodpeckers. Woodpeckers? Yup, New York has a bunch of kinds.

Then, last spring we went to a ranch in Patagonia, AZ and saw some amazing critters, including my very first hummingbirds. I love these birds. They come in so many varieties and they do everything the cartoons say the do. They dart and hover, their wings blurring a zillion miles an hour, and they sip nectar.

Which is where I come in.

As soon as I heard that there was even the slightest possibility of hummingbirds in LA, I headed to Home Depot where they had a whole wall of attractive feeders shaped like giant flowers and such. I bought some bird Kool-Aid and a huge black iron shepherd’s crook to hang the feeder from. Then I raced home, mixed up the nectar, plunged the crook into the flower bed beneath our kitchen window and hung the feeder.

Several days later, Jenny and I were having our tea in our lawn chairs and I complained that a) I had no idea how I was supposed to let the local hummingbirds know I had set up this lovely feeder and b) it seems the lovely feeder was leaking as the level of Kool-Aid seemed to be dropping a little bit each day.

As I was griping, Jenny tapped me on the knee and pointed.  A bright green hummingbird,  like something out of a sci-fi film, was hovering by the feeder. It gingerly approached, and slid its needle beak into one of the white plastic flowers that circle the rim. I watched in mute wonder. Then as quickly and quietly as he’d come, the hummingbird darted away and soared over our roof.

“Tell all your friends,” I shouted as he disappeared down the street.

It seems he did.  I have now seen a half-dozen different colors of hummingbirds. I’ve seen them sitting on or phone wires. I’ve even seen two of them fighting, clashing in the air with fluttering wings and puffed chests, then chirping and squawking till one was driven off and the other settled at the feeder. Fighting hummingbirds! Like tiny iridescent battle helicopters over a Taliban outpost!

I‘ve just returned from a ranch in Patagonia, a few miles from the Mexican border. While I was there, I didn’t do any drawing. But I did some things that reminded me of drawing and how it makes me feel.

I haven’t ridden on a horse since I was three and the ghora-wallah brought a pony to our house in Lahore and led me around the garden on its back. Last week, I clambered onto the back of Joe, a huge chestnut quarter horse with enormous patience for novice riders. The experience was so new, so strange, that I couldn’t stifle girlish giggles. The strangeness increased when a half-dozen of us, most outfitted in boot, ten gallon hats, gingham shirts and jeans, galumphed out of the corral and rode off in a cloud of dust like every posse I’ve ever seen in a John Ford movie. Only this time, rather than watching from the couch, I was in the middle of the herd. This thing that I have always seen and wanted and now here I was doing it. It was new and a little tricky but nothing like as scary as I’d imagined. My fears of immediately being unseated by a balky stallion and dumped unceremoniously on my head or in the Christopher Reeves Memorial Quadriplegic Ward, were replaced by exhilaration and power. One is never too old to learn something new and to marvel at how much more one’s body can do than one gives it credit for being capable of.

By Day Two, I graduated to loping which is sort of like galloping. Att first I couldn’t get the hang of it for the simple reason that I couldn’t see it in my mind’s eye. Then it came to me: that ‘hee-yah’ moment when a cowboy puts his spurs to his steed and gallops off after the injuns or the stage-coach or the escaping dogie. And now, I, bouncing up and down like a lunatic yoyo, was doing the same. Granted I was snickering like a jackass and clutching my saddle horn but I was doing it nonetheless and remained astride my mount.

Each day, we spend four or five hours thundering around the 6,000 acres of the ranch, up mountains, through ravines, and across gulches. My wrangler counseled me in horse psychology, warning me to never let my horse get the upper hoof, that I had to always remind Joe, with a kick to the ribs and a tug on the reins, that I was the one on top. Joe had spent his whole life running around these peaks and valleys and obviously knew what he was doing, but I tried valiantly to steer him and appear in control. I’d urged him up each hillside, and he’d scramble across loose chunks of rock, harumphing and snorting out great lungfuls of dust.

While Joe was doing most of the work, I’d try to do my share. I’d keep my eyes peeled wide as we slowly inched our way down really steep inclines, pulling on the reins and muttering ‘whoa’. Rock would crumble and shift, Joe’s hooves would clatter and I would hang on for dear life.

As the hours elapsed, my brain began to shift into a new state, one that felt really familiar. I was in charge — but also letting go, alive and awake — but also zenned and blissed out. I felt on edge and alert — yet safe and calm. New York and my office and all my cares felt thousands of miles away (2,454.7 miles, to be precise). The rocking motion, the spectacular countryside, the newness of it all, combined to wring out my head like an old washcloth. When I finally staggered out of the saddle, bowlegged with locked hips and dry as a saltine, I felt empty and peaceful — much like I always have after an hour with my pen in my hand and my sketchbook on my lap.

Patagonia is one of the world’s best bird-watching spots. I haven’t really paid that much attention to my fine feathered friends until this winter when I participated in the annual Central park bird count. I was amazed to discover so many species I’d never noticed, to be heeding bird calls and then tracing them to their sources, lurking in a bush or on a windowsill. Now we sat having breakfast in the garden and saw cardinals, woodpeckers, and five different species of hummingbirds. I felt my predator instincts emerging, noticing each little change in the landscape, the slightest shift in the leaves, a shadow in the grass. It was wild to feel so a part of nature rather than just tramping through it with my iPod on. And again, this started to feel like drawing to me, like the sharpened awareness that comes when you really see something clearly, studying every detail, overcoming preconceptions to be in the moment, fully present.

Drawing is a state of mind more than a way of putting ink on paper or filling a picture frame. My days in Arizona brought that home in a whole new way.