(This film was shot, and is best viewed, in full-screen HD. If there’s  a problem, you can go to it directly on Vimeo here.)

A few months ago I decided I wanted to make a series of films about illustrated journaling. Not a how-to, step-by-step sort of thing but films that capture the adventure of drawing, the discovery, the spirit, the fun. I hope they will inspire you to make drawings (and films, if you want) and to keep an illustrated journal as a regular part of your everyday lives.

My son, Jack Tea, has joined me in this project and together we have worked through lots of technical obstacles to make films that look as good as we can make them on no budget. Our inspiration comes from the Cooking Channel, from Etsy’s vlog, and from too many decades of loving movies.

We shoot on our Canon 7D, rent different lenses each weekend (in this case we relied heavily on the 100/2.8 L IS Macro), use Jack’s skateboard as a dolly, and rope our friends in for help and opinions.

Here’s the newest film in the series, a portrait of my great friend, Tommy Kane, as he rides around his neighborhood in search of something new to draw. Tom is a great traveller — he regularly posts sumptuous journal pages made on his vacations and business trips. His favorite home-away-from-home is Korea and he has made many amazing drawings on its streets and in its markets.

This time, we decided he should travel through his own neck of the woods, see it anew like a visiting stranger and capture a mundane little corner and fill it with his particular brand of magic. Normally Tom works mainly on site, dragging out all of his materials onto the pavement around his little folding stool but instead we decided to expand the scene and show you some of Tom’s home and studio and incidentally some of the wonderful big paintings he’s done on canvas. (He took the unusual step of using a reference photo he shot of the scene to jog his memory once back at his studio). 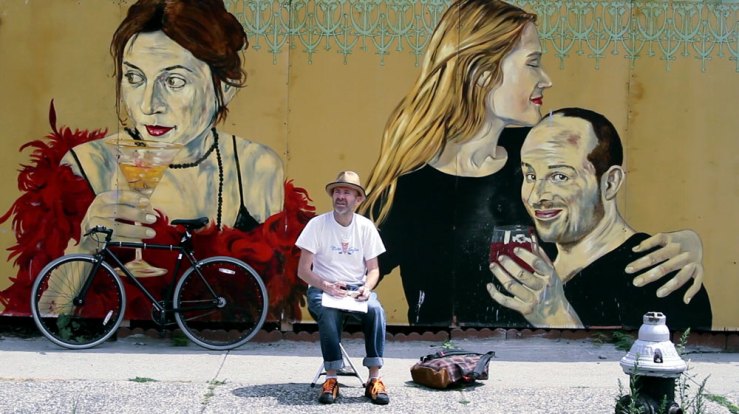 When journaling, he works in Uniball, watercolor and pencil, sometime in books, sometimes on loose sheets of bond or watercolor paper. He is a meticulous crosshatcher and spend hours on some of his drawings.  When we draw together, I invariably start to chafe at the bit and beg him to finish at home as I am tired of sitting in his shadow, my own drawing long finished and yellowing on the page, glazing over as he crosshatches more and more details. 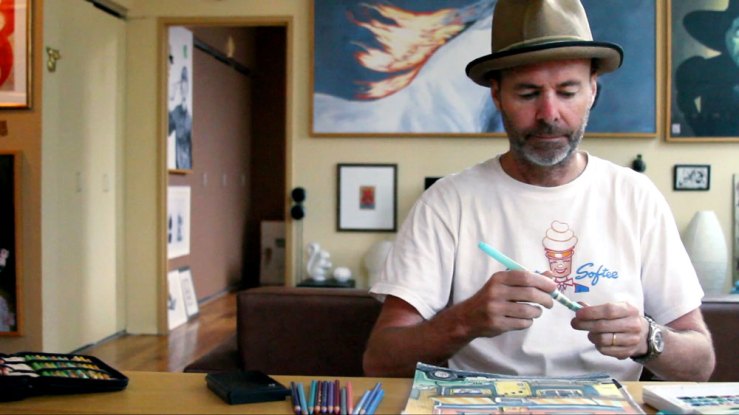 We shot the film in two days — on the streets of Brooklyn and in Tom’s home where his lovely wife, Yun, made us lunch and watched our obsessiveness with a bemused smile.  It was the height of a baking summer and storm crowds rolled in and out, marring our continuity.

We shot an extravagant amount and it took a month to wade through it all and pare it down. The first cut was twice as long as what you’ll see today, but we resharpened our blades and ruthlessly trimmed back to the bare essentials. We tried to retain the essence of how Tom works, the way he layers media and adds detail. It’s fascinating to see how his drawing builds and builds — when you see the final result, it’s often hard to figure out how he got there. With this film, please share in how the journey unfolds.