There was a book I was just obsessed with when I was eight. It was called Hans and Peter by Heidrun Petrides  (originally Swiss, “Der Xaver un Der Wastl“)and it told the story of two boys who find an abandoned workman’s shed and convert it into a playhouse. 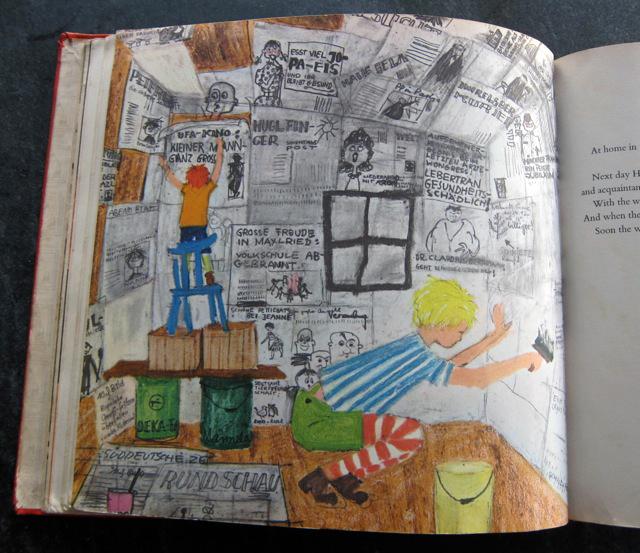 They cover the walls with newspaper and then whitewash it, they install an old wood stove, they plant geraniums in a windowbox, and make gaily colored curtains. The book was Swiss and had bright pastel paintings on every page (they were done by a 15-year-old girl!).

There was just something about this idea, of these boys making their own house, that was incredibly appealing to me.

I guess it’s the same instinct that had us building forts out of sofa cushions and making a pirate ship out of the linen closet. I yearned for a treehouse or a tent or an empty refrigerator box — something domestic I could call my own.

When I was nine, I was sent to live with my grandparents in Pakistan for a couple of years. I had gotten a small tool kit for my birthday and when my grandmother promised me my own small patch of land in her garden, I had intense fantasies about using the tools to build a shed with a padlock at one end of my acreage. I was enormously disappointed when I arrived in Lahore and my grandmother pointed to a bed of snapdragons and said, “That can be your garden, Danny. You can water it whenever you want.”

The only apartment I ever had entirely to myself was my first one on Clinton Street in the Lower East SIde. It was the most dangerous neighborhood in the blighted New York of the early eighties but I was incredibly proud to have my own minihouse. I built a loft bed, a couch and cupboards, then upholstered them and sewed pillows in fabrics straight out of Hans and Peter. A year later I was gone from the ‘Hood and living with roommates, then Patti and I moved in together, and now I live with Jenny in this microhouse in Los Angeles.

However after all these years, I have finally achieved my Hans and Peter fantasy.

Our house has an old two-car garage, built in the 1940s and made of wood with a big swing-up metal door. Since the day we arrived in LA, I have been busily turning it into a studio of my own, a cubby house, a man-cave.

I spent a day on my hands and knees scrubbing the floor, half chipped lino, half cracked cement. Then I built myself shelves, tables, and drawers to hold all my paints, pens, inks, and journals. I installed lighting, a sound system, and a grass green shag rug for the dogs to lie on while I work. 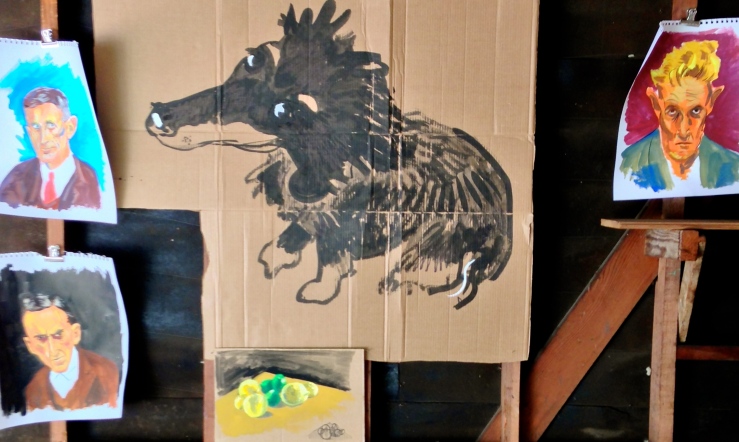 Slowly, I am filling the walls up with paintings — the first I have done in ages that are not in a small book.

It’s wonderful. I can work any size I want, a true luxury for someone used to painting in the space between my laptop and the edge of the dining table. I can work on a project, then at the end of the day leave it out, and resume work the next day. I can shoot videos in here and completely control the lighting and the sound.

I am realizing that my whole approach to art — small books, tiny watercolor sets, etc. — is probably a function of having had so little space and time. Who knows where this newfound freedom may lead?