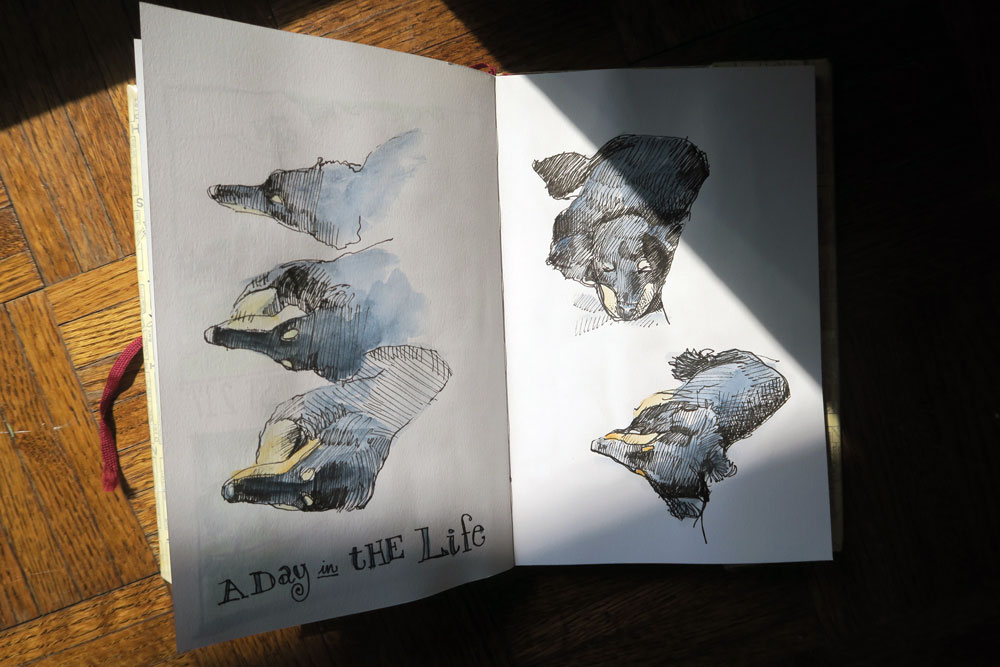 I looked up from my book and glimpsed the setting sun reflected in a window across West 3rd Street. It was enormous, an incredible, unnatural, cherry red. I rushed to the corner of the terrace to look at the actual sun but it was hidden behind a tangle of water towers and satellite dishes. I watched the last slivers disappear in the mirrors of my neighbors’ picture windows.

In the park, a woman in a black pinafore spun lime green hula hoops ’round her hips, her waist, and knees, and then suddenly convulsed and folded them all into a single shape, a globe with all its meridians demarcated by the buzzing hoops.

The fur on Tim’s back is curly as Persian lamb today. The air is still but he is knotted and wavy. His fur is a dusky rainbow: eggplant, auburn, battleship grey, matte black, all threaded with silver highlights.

I went to Jack’s room to put away some towels. On his top bookshelf, the albums of his drawings that we collected when he was just starting to draw, aged 2 to 4. On their spines, they’re labeled “The Art of Jack Tea Gregory, Vols 1-4.”  On the shelf below them, arranged, apparently in the last few weeks, a row of books of art notes Jack’s been making this year.  Each is labeled with a Brother P-Touch that I didn’t even know he had.  Those two rows of books encompass the last twenty years of his life. And of mine.

At least seven blocks away, there’s a railroad apartment. It has windows at the west end near me and at the far eastern side. A slice of sky is visible through that far window and, across that bright patch, the silhouette of a person passes back and forth. A single leaf on the crabapple tree across the street appears larger than that tiny silhouette yet somehow, I am connected, and know something about how that miniature person feels, pacing so many blocks away.

My film premiered today. It’s not too long so check it out and tell me what you think: https://tiny.one/dannyfilm
In September, I had this crazy idea to make an animated film. I had no idea how to do most of things I'd need and It seemed impossibly laborious. I just finished it and hope to share it with you very soon.
I have learned so much about so many things in the process of working on my new animated film.
Here are a few more scenes from my upcoming animated film. I have learned an enormous amount in the process of developing this project. I am looking forward to sharing it with you in the weeks ahead!
Over last four months, I have been working on my first animated film. Here are some scenes — I hope to release it in the next few weeks.
Celebrating Bastille Day by drawing Louis XVI. Watch me do it on Draw with Me: https://youtube.com/watch?v=WsIJjPSQXx4