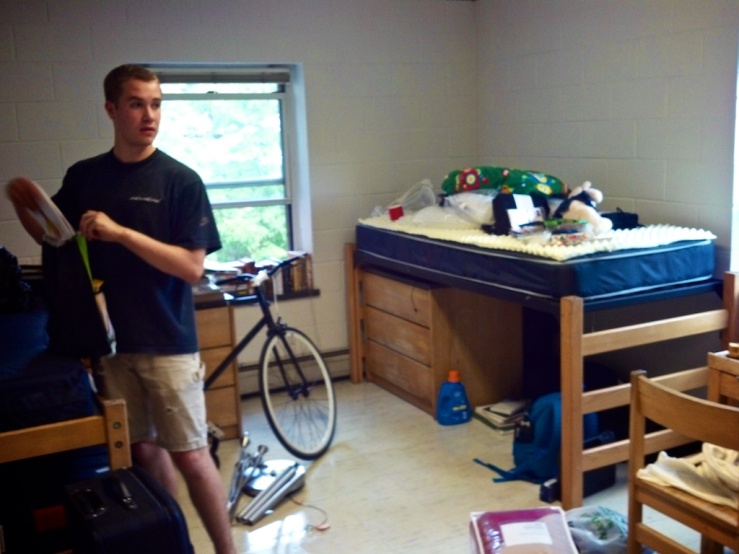 Three weeks ago, I dropped my boy off at art school in Providence, Rhode Island. It’s a trip we’ve been planning for years, maybe even decades. From the days when Jack was first able to pick up a crayon and started making marks on paper, his mom and I celebrated his creativity and put those pieces of paper into a special binder, a collection which grew to two books, then three, then a shelf-full.  We didn’t have any particular plan to create an artist or designer or an illustrator; we just celebrated what seemed special about him, and let him know that if this (or drumming or soccer or World of Warcraft…) is what he really loved most, it was fine with us.

When it came time to apply to college, I told Jack that committing to an art school had risks but so did any career path. As far as I was concerned, a bigger risk would be to seek a profession that didn’t ignite his passion, to simply try to make money at something in which he had no real interest. I know too many people who have gone down this path and found little at its end. That shelf full of drawings proved that Jack had a calling, a rare thing indeed.

I borrowed a truck from a friend, loaded it with Jack’s belongings and we drove up 1-95 to RISD. After lunch in the cafeteria, I sensed that Jack was ready to take off, that he wanted to set up his room, meet his new friends and start his life. My job was done.

I had been dreading what was to follow. I have only ever lived alone for about six months — after graduating from Princeton and moving into a studio apartment on the Lower East Side. Then I got some roommates, then a girlfriend who became a wife, then a son …. and the last three decades were filled. Overnight, I was on my own again.

For a year, I had been worried about being alone in my empty apartment — empty evenings, lonely mornings, no one to talk to but my dogs and the wind. My girlfriend Jenny has been in Dallas all summer and I have been missing her sorely too.

But here’s the funny thing: I love it.

Despite all my worries and fears of dying alone in my sleep and being eaten by my dachshunds, I love being able to decide when I get up, when I got to bed and what I do in between. What I eat, what I do, whether I watch TV or read or draw or stare out the window. It’s fantastic. Time expands. I have a huge sense of accomplishment and also of being relaxed and at my own pace. And I love having a neat apartment, not having soccer equipment on the living room floor or boxer shorts in the kitchen. I don’t have to share the bathroom or the remote control or the sofa. It’s just me and two miniature hounds.

I do miss Jack. I email him, he texts me, we chat on the phone a couple of times a week. He sends me phone photos of the art he is making and tells me about his new friends, about his teachers (for the first time ever he loves them all), about how great the food is.

And he is flourishing. He works his ass off, staying up till the wee hours doing enormous assignments. His first week, he posted the following on Facebook:

Then one of his new classmates uploaded this picture:

He’s going to be okay, it would seem, and so am I.

P.S.  I try to avoid getting emotional about commercials but this one has been getting to me:

I like having my own room to play in.
If my workshop doesn't seem your cup of tea, let me know why. I still have time to change it! If it does, learn more about it at https://bit.ly/dannydip
My prodigal podcast, art for all, has returned, with a sheepish grin and a suitcase full of new episodes to be served up every Monday. Have you subscribed yet?
I wasn’t sure if these chalk markers were my cuppa tea. But they are kinda tasty.
A squid drawn in ink. Get it?
My peeps.